The code formatter can now handle inline variable declarations. That was actually just a simple change (fixes bugs #157 and #158 (and the duplicate #165))

Now I’m trying to get it to format function declarations like this:

or something as simple as this;

Currently it doesn’t indent the additional lines. It works fine for method declarations though.

This turns out to be much more complicated than I thought. In my attempts to fix this, I have multiple times broken other test cases. Good thing there’s unit tests and source code management.

By pure chance I found a nasty side effect in the code.

The installers for GExperts 1.3.15 were/are detected as malware by several virus scanners on Virus Total. I have since submitted them all as false positives to Kaspersky and some to Microsoft and after their latest signature updates their scanners are now fine. I tried the same with other virus scanner vendors, but their procedure was so complicated that I decided that it is not worth the effort. So if you are using BitDefender or McAfee, you might be out of luck. Try to submit your installer to them yourself if you like, just so you see how much time that takes. Now multiply that by 19 installers and > 10 virus scanners … I guess you will understand then why I don’t bother.

David Hoyle just blogged about Adding Menu Items to the IDE Editor’s Context Menu. As always his article is quite insightful, in particular the last part, because many people forget this:

Well for a DLL yes as you would never get a situation where the Editor Popup Menu is called when you DLL is not in memory any more however this is not true for a BPL based plug-in so we need to reverse our hook.

… because a BPL based plugin can be loaded and unloaded at any time.

For which he then gives the following code:

And here we have a problem: How do you know that you can safely remove your hook? Some other plugin might have changed it and you will never know. If you simply change the OnPopup event back to the value you saved when you installed it, you might disable another plugin which was installed/initialized after yours. Or even worse, what if the plugin whose event you saved also has been unloaded? What do you do then? Simply reinstalling its original event handler will potenially crash the IDE the next time the event is called.

That’s exactly the reason why I wrote this article (years ago):
Safe event hooking for Delphi IDE plugins

I use this in my own plugins (Delphi IDE Explorer and parts of GExperts) and it works fine if both plugins adhere to this “standard”. Unfortunately I know of no other plugins who do. If you write Delphi IDE plugins, you might want to consider also trying to play nice with other plugins.

I just released GExperts 1.3.15 for all supported Delphi versions.

There have again been various bug fixes and the following notable changes:

dzBdsLauncher tries to solve the problem of accidentally opening a Delphi project with the wrong Delphi version. The latest version 1.0.2 now also detects .DPROJ file from Delphi 10.3.3. See the dzBdsLauncher page for details.

Edit: There is now a new release.

Before you ask: No, there is no new GExperts release yet for Delphi 10.3.3. I haven’t even downloaded it yet. I might get to it this weekend.

In the meantime you can get the sources and compile your own DLL with the new Delphi version. I don’t expect any problems (but I have been wrong before).

This is only relevant, if you have recently compiled your own GExperts DLL and you use the Uses Clause Manager’s Identifier tab:

There were several bugs in the unit parsing code that have been fixed. But you won’t see the effect, because the buggy results from before that have been cached. In order to get the benefit of these bugfixes, you must clear the Uses Clause Manager’s cache. 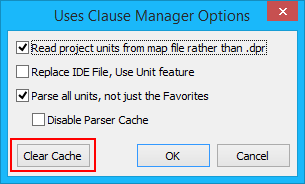 Yes, I know, that I should make a new release soon, but I keep finding old and sometimes new bugs and then there are people who submit patches. It’s difficult to determine when to make a release. But hey, you have got the source code and the compiler, so why not compile your own DLL?

One frequently asked question that still gets asked today goes like this: “How do I create an array of [component] and fill it with existing [component] instances from the form?” Where [component] usually is TLabel, TCheckbox or TEdit.

Let’s start by defining some parameters:

So, this is the form: 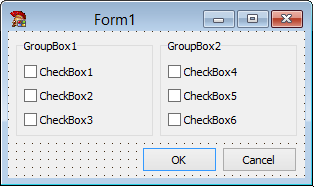 As you can see, it contains six CheckBoxes grouped in two GroupBoxes.
Now, for some reason, we want to disable all those CheckBoxes.

And for just 6 CheckBoxes we probably would. But lets assume there are 30 and we don’t only want to disable them all but also sometimes enable or check or uncheckm them all. That starts to get a bit tedious, so wouldn’t it be great if we could just create an array of TCheckbox and fill it with those pesky things? We could then just write:

But how do we get this array? If you ever programmed in Visual Basic, you know the concept of control arrays, which you get by “simply” setting an Index property of the controls. They would then all have the same name and you could access them individually by TheCheckBox[i]. While that looks nice at first glance, just consider setting these indexes correctly for 30 CheckBoxes using the (crappy) property editor that VB had. I hated it. But I deviate …

We want a function which we can pass a TForm parameter that returns a TCheckBoxArray:

If you look closely at the form declaration above you will notice that all CheckBoxes follow a common naming pattern: They all start with ‘chk_’ followed by a number. So we could use FindComponent to get them:

But if you think about it this is quite a bit of work, because you must make sure that your CheckBoxes all conform to that name pattern and for the above code to work, there must not be any gaps in the numbering. We usually want those CheckBoxes to have meaningful names rather than numbers, so it’s chk_Green, chk_Blue, chk_LightOn rather than chk_1, chk_2 etc. Also, what if you accidentally add another control that conforms to the name pattern but is not a CheckBox?

So FindComponent is out. What alternatives are there?

There is the Component array of the form, that contains every component on the form whose Owner is the form (this is usually the case for all components on a form when the form has been created using the form designer). So we enumerate all components and check whether they are CheckBoxes:

Much better. We don’t need any naming pattern and we only get CheckBoxes.

I mentioned above, that the form’s Components[] property contains all components placed on the form using the form designer. But components can also be created in code and there you can pass any other control as the Owner:

The function will not find such a CheckBox because by passing grp_1 to its constructor we add it the Components[] property of the GroupBox rather than the form. That’s perfectly OK. We also clear the name, which would prevent it from being found by FindComponent too. But if you write code like this, you probably know what you are doing and won’t have read this article up to here.

I could stop now, but there is another use case: What if we want to get an array of only those CheckBoxes in one of the GroupBoxes? We could pass that GroupBox as a second parameter to the function and check that the Parent property of the CheckBoxes matches the GroupBox. But there is a simpler way: Each WinControl (that is: Control that itself can contain other controls, which includes GroupBoxes, Panels etc. and of course Forms or Frames) has got a Controls[] property that contains those controls. So we make a simple change to the function:

This will return all CheckBoxes placed on the GroupBox grp_1.

… will now return an empty array! None of the CheckBoxes have been placed on the form itself, so they will not be in the form’s Controls[] property.

If you haven’t been bored out of your skull by now and want to discuss this article, you can do so here in this post in the international DelphiPraxis forum.

I found a bug in dzPrepBuild that required a new release: If a .dpr file is passed as parameter the ProjectName placeholder would also have that extension.

I just released version 1.3.3 of dzPrepBuild

The reason for this release was that I wanted to allow automatically updating the ProductVersion when the FileVersion changes. In order to do that, the tool now supports two additional placeholders that an be used in any version string: {MajorVer} and {MinorVer} which, as you might have guessed, resolve to the major and minor version number.

I also added {ProjectName} which resolves into the name of the Delphi project and is used in the example above for the InternalName and OriginalFilename entries.

While working on this enhancement unfortunately I also found a major bug that was introduced by a patch I accepted nearly years ago. It added support for private and special build flags but used the wrong names for these entries in the .dof, .bdsproj and .dproj files which resulted in –ReadDof, -ReadBdsProj and -ReadDproj failing. This is now also fixed. I never noticed this problem because I don’t use the built in Delphi version information any more. All my projects have an external [projectname]_version.ini file for maintaining the version information.

And since I was at it, I moved the project from SourceForge to OSDN. The new version can be downloaded from there.