On 2015-10-05 Erik Berry, who had been maintaining GExperts for more than 20 years, announced that he would stop actively working on it. By that time I had already become the most active contributor to the project and had been offering experimental GExperts versions for several years (one major part was adding the Code Formatter formerly known as DelForEx (link to archive.org, original no longer available). The code has kindly been donated by Egbert van Nes.) And since nobody stepped forward to take over the project, I have become the de-facto project leader. Erik is still the owner of the gexperts.org (and gexperts.net) domains, as well as the project on SourceForge and the mailing list on Yahoo.

Since Erik no longer updates gexperts.org, I have tried to collect and document the latest changes on the GExperts documentation page.

If you want to say thank you for my work, check out the

Note: For instructions on how to install the following older archives, see below the links.

even older versions are available from my old home page.

Several people have asked me to provide the source code. It has always been available from the GExperts SubVersion repository. There used to be a special formatter branch for my version, but since 2017-02-25 it has been integrated into the trunk. (Even older versions were based on the CVS repository.).

Before I started providing installers, my experimental version used to be a patch for an existing GExperts installation. The archive contains:

DLLs\GExpertsXxxx.dll
GExperts for the supported Delphi versions (6, 7, 2005-2010, XE1-XE8, 10) where the formatter is implemented as an editor expert
FormatterSettings-Yyyy.ini
Several predefined settings for use in the formatter, the default is FormatterSettings-Borland
preview.pas
A sample sourcecode file that is used inside the configuration dialog for previewing the formatting
install
A bunch of Register-GExperts-Xxx.cmd scripts for registering the GExperts DLL for the various windows version if it hasn’t be done by the official installer. (see !Readme-Install.txt for an explanation)

To install it, you must first download and install the corresponding release of GExperts (currently GExperts 1.38 Beta). To install manually without the official installer, see the included !ReadMe-Install.txt file. Afterwards you copy the file preview.pas and all the .ini files to the GExperts installation directory. In addition you need one of the .dlls. Choose the one that corresponds to your Delphi version and replace the existing GExpertsXxxx.dll file with the one from the ZIP archive. 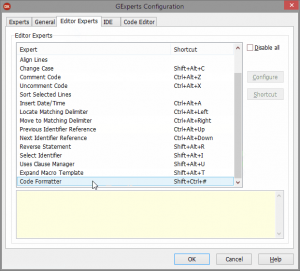 (Click the picture to get an animated gif showing you how to configure and use it.)

Editor experts are listed under the GExperts menu’s Editor Experts entry but are usually activated using the configured shortcut.