The TManagedFormRplcDialog class descends from TManagedForm and makes the Replace dialog sizeable for Delphi 6 to 2007 (it is already sizeable in later versions) and fixes a placement bug in Delphi 2005 to 2007. It has two protected methods that override the empty methods of its ancestor: 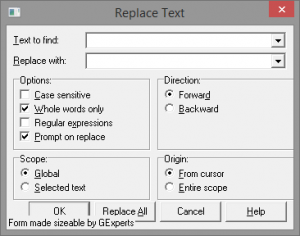