The TManagedFormProjectOptionsDialog class descends from TManagedForm and makes the Project Options dialog sizeable for Delphi 6 and 7. It has only one protected method MakeComponentsResizable which overrides the empty method of its parent class. It changes the Anchors property of all controls to make them move in a meaningful way. There is one panel, that is usually hidden behind other controls, which has a caption that becomes visible when sizing the dialog. So we also set that caption to an empty string.

That panel also has the name “Panel1” which gives us a hint on how “carefully” this dialog was designed back in the day (Which does not mean that you can’t find this kind of component naming in the later Delphi versions, even some buttons are called Button<N>) 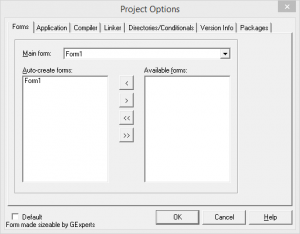