The last point is what I strongly disagree with for dialogs like the one in his example. It has got a list of chapters from a book that are to be exported. This list can be rather long so it is quite likely that it at one time get a vertical scroll bar. Also, chapter headings might be much longer than simply “Chapter 1” (and you want to display those headings so the user can make an informed decision on which chapter(s) to export.), so it is also likely that the list gets a horizontal scroll bar (or even worse, if the control you use does not support horizontal scrolling: The items get cut off on the right.). This reduces usability significantly. Just have a look at the Microsoft Printer installation dialog: 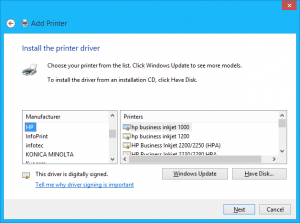 We are no longer living in the 1990ies, when you could count yourself lucky if you owned a 17″ Monitor with a resolution of 1280×1024 pixels. Today, there are users who have got a a 30 inch monitor or even several of those and with resolutions up to 8K, where this dialog shows only in the center with the perceived size of a postage stamp.
As a user I want to maximize this kind of dialog so I see more entries of the list and also read the whole description.
So, rather than using BorderStyle = bsDialog, use bsSizeable and make sure that you set the Anchors and Align properties of all controls in a way they resize and move sensibly.

Again, this was fine for the 1990ies. But nowadys the owner form can be huge (e.g. full screen on a 30″ monitor) and you clicked a button somewhere on that form (e.g. in the bottom right) to get to this dialog. Would you really like the new dialog to pop up centered on the owner form? Your mouse just moved to that button and your visual focus also did. Now, all of a sudden you have to move your focus (and your mouse) to the middle of the screen. My suggestion in that case would be to center the new dialog on the button the user clicked to open it. Of course this should still make sure that the dialog is fully visible and does not cross monitor borders.