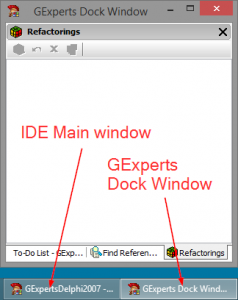 The Delphi IDE has supported docking of various forms for a long time (I don’t remember if it ever did not). Unfortunately if not docked, the floating forms always seem to be in the way, and if you dock them, they take up screen space that you might rather use for the editor window. Given that most of us have got more than one monitor, wouldn’t it be nice to move some of these docking forms to the second monitor?

You can already do that by just undocking one form and docking other forms to it. The resulting floating window can be moved freely, even to another monitor. What you can’t do with it is minimize it or use WIN+Arrow Keys to snap them to the left or right monitor edge.

There are now two enhancements in GExperts that address this:

The first one is the new IDE enhancement “Enhance Dock Forms to allow minimize and Win+arrow positioning” which can be enabled on the IDE tab of the configuration dialog. 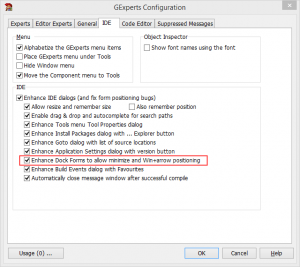 Once set, those floating forms get a minimize button (which of course works) and can be moved to the left or right half of the monitor with Win-Left or Win-Right arrow keys. The usual mouse gestures you can do with any window are also available. 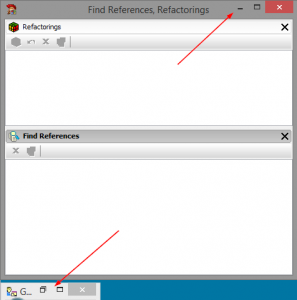 Unfortunately this only works if more than one form have been docked together, so a single floating form will not show these enhancements.

The second enhancement is the new “Add dock window” expert. It creates a new top level window to which any docking form can be docked. It too allows all the usual Windows shortcuts for placing and moving forms. In addition it has got a button on the taskbar so you can minimize it and restore it easily. It can also be put behind the IDE main window or on a different monitor. The taskbar button makes it easy to bring it back.

You can even have multiple of these GExperts dock windows.

Unfortunately they have some drawbacks too:

I’ll try to address these problems in a later version.

Both enhancements work for all supported Delphi IDEs, btw.

There is no release with these features yet. To get them, for now you have to compile your own GExperts dll which isn’t exactly rocket science anyway.

This idea is based on a question by Codehunter on the German Delphi board Delphi Praxis.