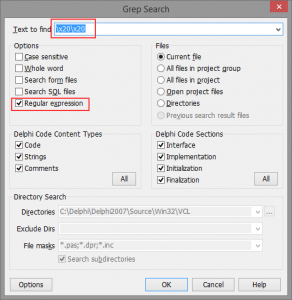 Up to now it was not possible to use \t (and similar escape sequences) in the Grep replace dialog. They were not expanded properly but the \ was treated as escaping the character following it, meaning \t was replaced by a simple t character.

I also removed the restriction, that you could not search for space character(s). (Bug #81)

A word of warning:
Please keep in mind, that the Grep Replace functionality is still pretty much experimental. It replaces literal characters, so it is probably not a good idea to replace ‘\r\n’ with “\n” only, it will break the editor. Also, be very careful with replacing matches in all files. It might completely destroy your source code as it also replaces matches in the dpr file and dfm files (I had to revert the full project using SubVersion the first time I tried it. I lost all my not committed changes because of that. You learn from your mistakes, especially when they hurt you like this.)

There is no release with this functionality yet, but you can always compile your own dll.