The Uses Clause Manager Expert in GExperts used to look like this: 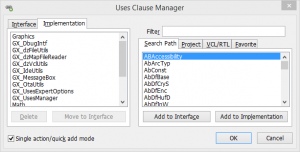 While it was a very useful tool as it was, I have added to it quite a lot in the recent weeks: 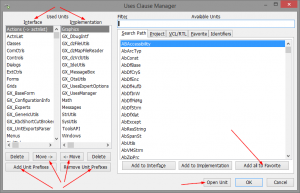 Let’s start with the simple changes:

Interface and Implementation uses clauses are now visible at the same time. This allowed me to add buttons to delete from each and to move from one to the other. These Buttons also have corresponding popup menu entries and keyboard shortcuts that depend on the context:

There are also buttons to add or remove the dotted unit prefixes, e.g. they convert “Registry” to “System.Win.Registry” and vice versa.

Then there is an Open Unit button which can be used to open the currently selected unit in all lists.

Also, there is a new button to add all units from a list to the Favorite list. This list has become more important than it used to be, see below.

And last but not least there is a context menu entry to unalias all units. This means that it will replace units like WinTypes and WinProcs which have been declared as aliases to Windows for ages with their actual unit. The same goes for dbiTypes, dbiProcs and dbiErrs which will be replaced with BDE.

I have also replaced the ListViews with StringLists which makes the display much faster for large lists (see below) and allows me to distinguish between the currently selected item(s) in each list (dark gray) and the currently focused control (blue).

And now to the huge change: 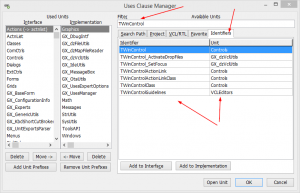 It’s a new tab with a list of all identifiers that are declared in the interface sections of all units in your favorite list. Similar to the already existing filter for unit names it allows to filter for identifiers. In the screen shot, I typed “TWinControl” and the list was filtered down to just 7 of the several thousand entries. This is a replacement for the IDE feature Refactor -> Find Unit, but in contrast to that feature, it works (Find Unit fails for me in about 30% of all calls.). And of course it also works for the old IDEs which did not have that feature.

Btw.: Did you known that you can scroll within the lists while the focus in on the filter edit?

I plan to make a new release including these features later this weekend. So stay tuned!