I have been asked to provide GExperts for Delphi 10.2 Tokyo, multiple times, via various channels.

Apparently not everybody subscribed to the GExperts Community on Google+, where I posted this on 2017-04-01: 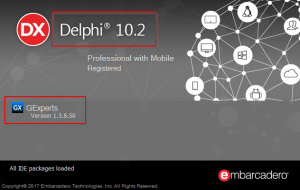 This version should solve several bugs that resulted in Access Violations in the IDE or made the IDE hang.

Again: This is not for the faint of heart. It is barely tested. Download only if you promise not to blame me for the work you lost.

There seem to be multiple download links on the web for GExperts for Delphi 10.2 Tokyo that want to charge for a “VIP membership”. These have not been authorized by me at all.

To those who already downloaded it back then: This is still the same version. I have started working on a major change in the way dialog changes and bugfixes are handled internally, which currently is a mess. That change is far from finished, so it doesn’t make much sense to build a new installer right now.