Prompted by a comment in this Google+ post I had a look at what is actually listed in [HKEY_CURRENT_USER\Software\Borland|Codegear|Embarcadero\BDS|Delphi\#.0\Known IDE Packages] and found some interesting entries:

In Delphi 6 and 7 there is direct60.bpl and direct70.bpl which can probably simply be removed nowadays. The server used by “Delphi Direct” which was the equivalent of the current “Welcome Page” no longer exists. Removing this package results in the Environment Options dialog having one less tab: 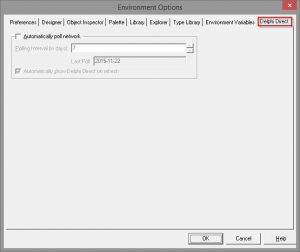 I never understood the purpose of Delphi Direct. Even back in the 1990ies there wasn’t any interesting content delivered to it. In my opinion it was totally wasted by Borland.

Then there is delphiclxide60.bpl and delphiclxide70.bpl. These packages apparently contain the designer for CLX applications (anybody remember theses?). When removed, there are still some CLX items in the File->New->Other menu and these can still be used, but you will no longer be able to visually design these forms and dialogs. Also the File->New->CLX Application entry will be gone. In Delphi 6 this results in some designtime packages not being able to load, in Delphi 7 it doesn’t but that might just be because I removed them earlier. 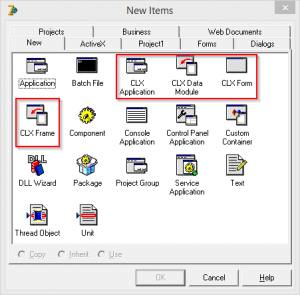 Since I doubt that anybody is still developing CLX applications, it’s probably safe to remove these entries as well.

Moving on to the “modern” IDE, which was introduced with Delphi 8 (which I don’t own, so I’ll look at Delphi 2005 instead):

The startpageide90.bpl package is the equivalent of Delphi Direct mentioned above. It is still there in Delphi 10.1 Berlin as startpageide230.bpl. It has been suggested to remove this package because it is hardly useful. I haven’t done that because my delphi7help4bds expert uses it to display HTML content.

There is caliberide90.bpl or Borland.Caliber.IDE100.bpl as it is called in Delphi 2006. After removing it in Delphi 2006 I found nothing missing. Caliber apparently is a requirement management tool now owned by MicroFocus (who acquired Borland after they spun off their development tools as CodeGear). I’m not sure what exactly it does or did in Delphi 2005 and 2006 but it is no longer there in Delphi 2007 and later. The same applies to TGIDE90.BPL which is the “Together IDE integration”. It’s the UML modelling tool Borland acquired in 2003.

Another interesting entry is historyide90.bpl. It apparently implements the history tab (at the bottom of the editor, to the right of the Code and Design tabs). 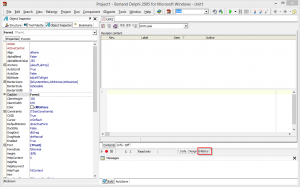 Some other observation: Starting with Delphi 2006 the key “Known IDE Packages” has subkeys, one of them is “Delphi”, others, that were in use at some time are:

There might have been others but I recently stopped installing anything but the Delphi personality even though my (employer’s) subscription is on Rad Studio just in case.

I’ll stop here with listing those packages. Just some comment about enabling and disabling them:

Apparently they don’t get loaded if the entry does not have a value. Some of the packages have a value of (Untitled) which apparently means “nobody bothered to give them a name but we need a value so we added something generic”. If you remove this value (set it to an empty string) the package will no longer be loaded. But it’s probably not a good idea to disable them by removing the value. I did my tests by creating a new “unused” subkey and moving these packages there, including the description.

I’ll probably write another post on this topic at a later time. I’m also thinking about writing a tool to disable/enable entries in Known IDE Packages.