I tried to compile the SarchWiz project by Corbin Dunn, which he describes in the corresponding article which in turn Ondrey Kelle mentioned in his blog post More Subversion.

The first problem I ran into was that the original wizard was written for Delphi 5 (yes 5, not XE5). So some package and unit names had changed.

Then, there is TDockableForm, the ancestor of the TSearchWizForm class used in the wizard. Apparently the declarations of LoadWindowState and SaveWindowState have changed. In Delphi 5 the Desktop parameter was a TMemIniFile, nowadays it’s a TCustomIniFile.

The last change to get it to compile was changing the WebBrowserBeforeNavigate2 method. In Delphi 5 some parameters were declared as var, they now are const:

So, I compiled and installed the package without errors, and … nothing happened. Since it is an ancient wizard, I looked into the help menu and found Help -> Help Wizards -> Web Search, which is the menu entry added by the wizard. Clicking on it still didn’t do anything.

After putting a breakpoint in the wizard’s execute method (and setting the host application to the Delphi ide), I found that the window is actually being created and shown. It’s listed in the IDE’s Window menu and I eventually found it on the screen: It was far down behind the task bar (which fortunately in Windows 8.1 is transparent). So, switching to it and pressing Alt+Space gave me the system menu and selecting Maximize finally brought it somewhere sensible. It turned out that the problem was this code:

After changing it to simply 10, the wizard window is displayed and can be used.

It’s very strange to see Altavista, Deja.com, Excite and Northern Light in the list of search engines. Apparently Altavista now gets redirected to Yahoo, deja.com is now Google groups, excite.com still exists, but search.excite.com does not work, and northernlight.com is no longer a search engine. I changed the excite entry to the new url and it worked (ignoring some JavaScript errors).

This is what it looks like when sarching excite for “delphi programming” when the wizard is docked to the Delphi 10 IDE: 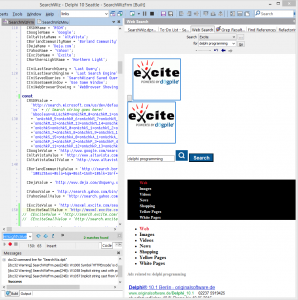 Now, you might ask why I went through all this, just to have a web search window in the IDE? It’s connected with my Delphi7Help4Bds expert. It currently uses the Welcome Screen to display its results when configured to call a url. I thought about creating my own browser window and – you know that if you looked at the code – I had started to build something based on some code I got from Simon Stuart before he stopped publishing stuff under open source licenses and shut down his blog in 2012. And since I was unable to get it to work, I googled for other stuff using similar techniques. So I came across Ondrey Kelles’s post and the links there took me to this ancient wizard code. Isn’t it strange what turns life can take?