This spawned a discussion in the international Delphi Praxis forum and resulted in a rewrite of the expert. It’s now called “Filter Exception” expert and instead of hooking the dialog it directly hooks into the code that shows this dialog. Thus it prevents the dialog from being shown for filtered exceptions.

I have to thank Mahdi Safsafi of Delphi Detours Library fame for the detective work that lead to to this hooking code.

In that same discussion Der schöne Günther suggested to add a project scope to the filtering. I have implemented that too.

So now the expert can filter on:

I have added all those exceptions that the Delphi IDE raises on every startup to my filter. It filters on the Project = “GExperts.*”, the exception classes and the messages it shows.

That means it will no longer annoy me with them while I am debugging GExperts but will still show them for other projects. 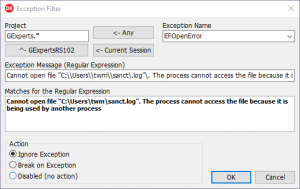 It’s also possible to add a filter for the current debug session only, which means that it will be deleted automatically once the debug session ends.

Unfortunately hooking of the code is only available for Delphi 2005 and later. Older versions still have got to hook the Exception Notification dialog.

If you want to test this new functionality, you’ll have to compile your own dll. Try it, it’s not rocket science!

If you want to discuss this article, you can do so in the corresponding post in the international Delphi Praxis forum.