The Delphi IDE has the quite useful option to add custom entries to the Tools menu. These entries call external programs with some “Macros” that reference the current IDE status, e.g. the currently active project or source file and some of their properties like the output directory or the current editor column and row.

GExperts already enhances the Tools Properties dialog by adding auto completion for the file name and the working directory (for Delphi 6 and 7 it also adds support for Drag and Drop, but that doesn’t work for later versions).

It has always irked me that there was no easy way to port these custom tools entries from one Delphi version or installation to another. I always had to copy and paste four fields to achieve that. 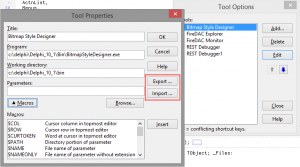 These buttons write / read Delphi Tool Menu Entry files (*.dtme), which are in INI file format an look like this:

So, to move an entry from one IDE version to another, export it from the first one, add a new entry to the second one and import the exported file.

I’m thinking about adding a special clipboard entry format for this so creating a file to copy these entries will no longer be necessary, but that’s for some future time (which may be very near but maybe not).
Edit: Done, see here.

I am also currently working on a small side project called Delphi Tools Manager which will supply that functionality outside the IDE, but it’s not quite ready for prime time yet. I actually already made a release available but had to withdraw it because I found that there are apparently two different ways the IDE stores these entries in the registry.

There is no new GExperts release for now (I am waiting for the next Delphi point release which should be just around the corner. I’m just guessing, I have no internal knowledge about the release schedule.). In the meantime, if you’d like to get this feature, you will have to compile your own GExperts DLL. But that’s far from being rocket science.