Have you ever wondered which functions of GExperts you have used the most? Or how often at all? How much time it has saved you?

Now you can find out: I just added Usage Statistics to GExperts which tells you exactly how often you have called each of the experts, in the current session and also in total (data between sessions is saved in the registry). Currently it can be accessed via a button in the Configuration dialog, but I am not sure yet where to put it. 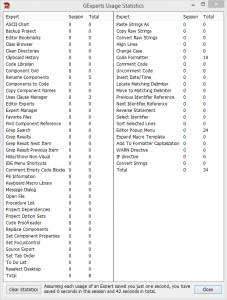 So far, it has told me nothing new: My most used functions are, in descending order:

But this is just after a few minutes of actually using GExperts after I have added the statistics, so there might still be some surprises. I am wondering about the Code Proofreader for example.

I plan to do a new release shortly (oh my, the last one is over a year old!), maybe even during the Easter holidays, but don’t hold your breath. In the meantime, you can simply compile your own GExperts dll.