Just in time for the holidays, here it is, the Christmas release of my experimental GExperts version.

You might already have read my blog posts about the work on some of the new features, but let’s start with the “boring” one: I fixed the Unicode support again, this time actually the non-Unicode support because the latest changes had broken the formatter in Delphi 6 and 7.

On the more feature-ish side there are now some more dialogues that are being made resizeable if you enabled it in the configuration on the IDE tab: 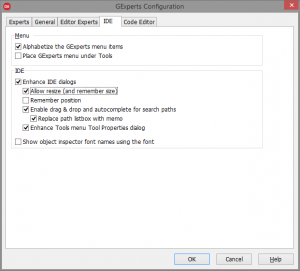 Also, I split the options into “Allow resize” and “Remember position”. I for one disable remembering the position because in a multi monitor set-up, it’s more of an annoyance than a feature. Getting the Options dialogue in Delphi 6 an 7 to be resizeable was a bit of a challenge.

Most of you won’t care about the other two features, but I implemented them anyway: GExperts now shows an icon on the IDE splash screen

as well as an entry on the IDE about dialog. 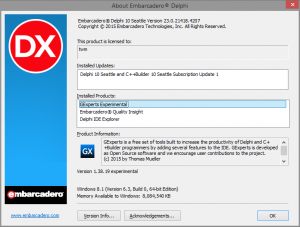 The latter currently only for Delphi 2005 and later, but I might also think of a way to do the same for Delphi 6 and 7.

I also updated the Experimental GExperts page to reflect the latest changes. It now also includes an animated GIF demonstrating how to configure and use the Code Formatter.