In the comments to my Google+ post announcing my blog post on Hacking the Delphi 10 Project Options dialog Ondrej Kelle said:

If two or more plugins hijack the same global event handler then they must restore the previous (from their point of view) handler in reverse order, however this is not guaranteed and therefore this technique is likely to cause trouble.﻿

API should be written, safe for plugins to use instead of the event handlers

to which Heinz Toskano added

This scenario remembers me when I wrote interrupt handlers for DOS. The civilized way was to hook and return the original handler, except when you replace the interrupt, in that case you was obliged to expose the original interface, just to not broke something else. Something similar must be done with IDE plugins, otherwise it will become bad coding.﻿

I did a quick Google search but found no existing standard so I decided to simply describe one and publish it in the hope that others will find it useful and adhere to it.

NOTE:
I have moved the code and description to it’s own static page. I will improve it as I go along and blog about these improvements.

I post a link to this article on Google+. If you want to leave any comments, use this post. 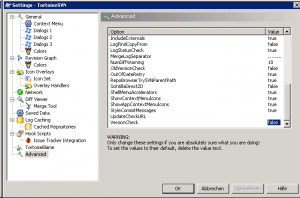 Today I wanted to do something I did before: Add a drop file handler to an edit control in a dialog of the Delphi IDE. The dialog in question is the the Project Options dialog.

I thought it would be pretty simple to do that:

Pretty standard for somebody who has written IDE plugins for Delphi before and is somewhat acquainted with its internals. Little did I know how difficult it would become.

First, the Project Options dialog is created dynamically (many other dialogs are created at program start). So, how do I access it?

It turns out that the global Screen object has got a useful event for this: Screen.OnActiveFormChange which is called every time the active form in the IDE changes. So my plugin could just assign an event handler to it and wait for the Project Options form to become the active one. This works, but there are two pitfalls:

To solve the first I have to hook it and call the original event handler.

To solve the second, I had to enhance my Delphi IDE Explorer to dynamically update its display. It also hooks Screen.OnActiveFormChange for this. This gave me the name and class of the Project Options dialog:

So, now I had the dialog instance and needed the edit control for the debugging host application. Again, using the IDE explorer, I found its name and class name:

So, it’s just a matter of calling FindComponent, check the class type to make sure it is the correct control and be done with it, right?

Not so, the Dialog also contains some frames that own their controls rather than the form. So I had to traverse the control hierarchy in order to find the control. It looks like this:

The numbers in front of the controls are its index in the parent’s Controls array.

The last challenge was the control’s class: THistoryPropComboBox. Whatever it is, it is not a TCombobBox but at least it derives from TCustomComboBox, so I could typecast it to that. But how do I access the Text property to fill it with the name of the file dropped on it? It is a protected field in TCustomComboBox. I took a gamble and assumed that it just publishes this field like TComboBox does and hard type casted it to TComboBox. It worked.

So, after several hours of hacking I can now drop an executable from the Windows Explorer on the Host application input field and its filename will automagically appear there.

As you can seen from the table above, there are some other interesting input fields for drop file support. They will come next, but for today, one is enough.

Note to self: If you encounter the error

bds.exe – Entry Point Not Found
The procedure entry point
@System@Sysutils@Exception@GetBaseException$qqrv
could not be located in the dynamic link library
C:\Delphi\DelphiXE8\bin\dbkdebugide220.bpl.

while trying to debug an IDE Expert for Delphi 10 Seattle: 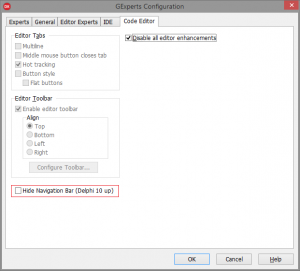 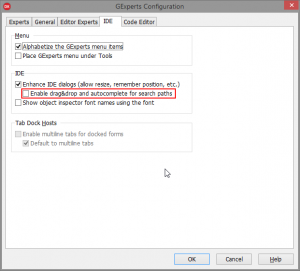 In Using my buildtools I wrote that you must prepare your project for translation with dxgettext manually. No longer, there is now a script PrepareForTranslation.cmd that does it for you.

As an addition to Using my buildtools here is a batch subroutine to find a subdirectory in any of the parent directories of a script:

To use it, you first have to copy it to the script that wants to use it. (You could probably also put it into its own file an call that file but for my purpose that would not work.) Then you call it like this:

As you can see, it needs two parameters. The first one is the directory from where to start searching. Lazy bastard™ that I am I just take the %0% implicit parameter of the batch file that contains its name. While that actually is a file name and not a directory it will work nonetheless because %0%\buildtools does not exist. The second parameter is the name of the subdirectory to find. So the above looks for a subdirectory called “buildtools” in any of the directories contained in the full filename of the current batch file. Don’t forget to add a

to the end of the main batch code so it will not execute the subroutine as well.

The full batch file I use in GExperts to call a central doBuildProject.cmd script located in the buildtools directory looks like this: