Due the the COVID19 pandemic I am currently working from home, using Putty + ssh + Remote Desktop to log into and work on my office PC. For this to work, the office PC must be turned on and booted. So far I have let it running 24h which is really a waste of energy but since sometimes nobody is in the office at all, that was the most fool proof way.

Today I have had some time at my hands waiting for an Ubuntu server to finish installing, so I thought about alternatives.

Finally I stumbled upon an article on How-To Geek about “How to Make Your PC Wake From Sleep Automatically“.

The Windows Scheduler has an option to wake up the computer to run a task. Note that it works only if the computer wasn’t turned off but rather sent into hibernation. So I set up a task that runs “cmd.exe” with the parameter “/c exit” weekly on Monday to Friday at 7:30. Of course I tested it first with a on time schedule and it worked fine.

So now I have sent my office PC into hibernation. We’ll see whether it is available on Monday when I want to log into it.

EDIT:
It turns out that my office PC supports WOL even though it’s not visible in the BIOS. But the network card properties under Windows have a setting for it: 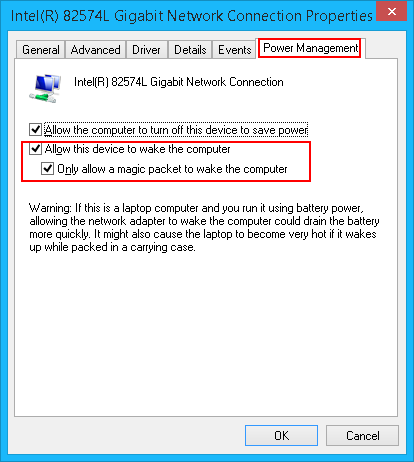 So when I read the hint from Vandrovnik on the international Delphi Praxis forum, I ssh’d into the company intranet and was able to simply wake up my office PC using the wakeonlan tool installed on the remote logon computer:

Great, this is much more flexible than I thought.